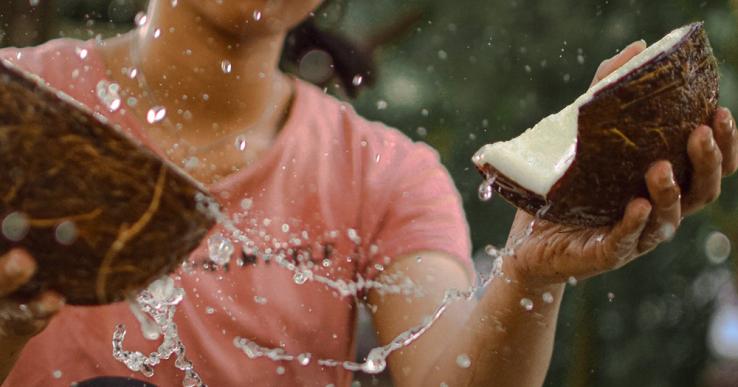 I was shocked, well, not really, when the trouncing of coconut oil hit last week on Marketplace. It was bound to happen. Any billion-dollar industry such as coconut would increase the competitors' angst and ire.

I wish I could have been a fly on the wall when Marketplace did the final editing. Even knowing how incredible coconut is, I was fascinated at how easily one might be swayed by the brilliance of an editor’s skill. The coconut lovers who ‘made the cut’ appeared shocked by the evidence against coconut. The editing was cleverly done.

Last year, when the trouncing started, I wrote an article called  ‘We Say YES to Coconut’. After the power of Marketplace, it deserves reprinting.

Back in the 50’s there was a huge campaign against coconut, claiming it was an unhealthy saturated fat contributing to heart disease and other ailments. No thanks to the American doctor, Ancel Keys, who documented this misinformation, we all stopped eating coconut.

We continued to not eat coconut. This ‘trend’ has led many to be overweight, obese and unhealthy.  We listened to this bad advice for over 50 years. And then suddenly, this new century, coconut became a good thing. Studies showed that this saturated fat was actually a miracle food, healthy, sustaining and prolonging our life.  People started eating coconut and using it cosmetically on the skin. And loving it.  We re-read studies showing its benefits. Maybe, just maybe, we had been misled all those years.

Research in 1981 by Dr. Ian Prior showed that Polynesians who consumed high amounts of coconut in their diet had normal levels of cholesterol and low incidence of heart disease. In 1987, Dr. Rodolfo Florentino confirmed that the Bicolanos of the Philippines had the highest consumption of coconut and the lowest incidence of heart and cardiovascular disease.

Pacific Island countries ( Nauru and Micronesia,) abandoned their coconut-based traditional diet in favor of the US diet of canned meats and other processed foods, soybean oil and margarine, have become the most obese in the world.

Coconut IS A GOOD FOOD. So why, now, in 2018 is coconut getting a bad rap again? The fact is that coconut, a medium chain fatty acid, not a long chain one like the other saturated fats, is probably one of the best foods on the planet.

Why the attack on coconut?

Perhaps, this anti-coconut campaign is a ploy to draw our attention elsewhere.  Notably and cleverly towards canola oil?  Canola Oil. GMO. Monsanto. Canadian fields are abound with canola.  You can choose whether or not you wish to consume canola. But do not displace your coconut. Coconut has been around for millennia, tested and true. Don’t listen to the disparagement.

We use coconut oil in the following products. Proudly.