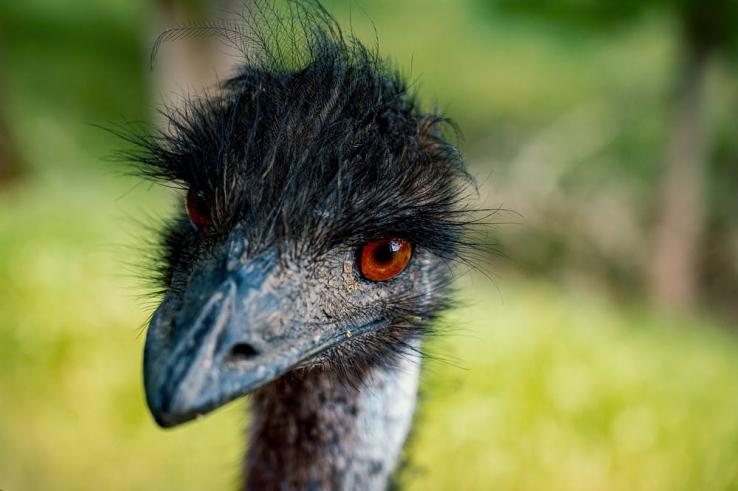 If I was forced to choose only one product in my skin care arsenal for the rest of my life, it would be emu oil.

First world countries are spoiled. We have too many cosmetics choices. Some amazingly good. Others not so. Emu oil is one of the good ones.

Our main interest in emu oil is its skin nutrition. If plowing through medical journals is not your idea of a good read, you might prefer a précised synopsis of the article I found on red, itchy, scaly skin. Seborrheic dermatitis (aka as eczema and psoriasis).

Comparing the efficacy of Emu oil with clotrimazole and hydrocortisone in the treatment of seborrheic dermatitis. Or perhaps in lay terms: A contest between Emu Oil vs Steroids and Antifungal agents

While this skin condition, seborrheic dermatitis, surfaces mainly on the scalp causing redness, scaliness and stubborn dryness, dandruff, it can also appear on the face, ears, eyebrows, eyelids and on down to the chest. Not fun.

Since emu oil is known for its anti-inflammatory and anti-bacterial properties, it was an excellent player to compare to pharma.

What was involved in the study

126 faces with Seborrheic dermatitis were involved, the volunteers ranging in age from 14 to 60. The right side of all the 126 faces received the emu oil. 62 left sides clotrimazole, 64 left sides hydrocortisone.  During this month-long study, the patients were asked to do the treatments morning and evening.

The emu oil in this experiment was stated as 20% pure topical emu oil, which set off my alarm bells. This 20% emu oil was from Abian Ltd., Kashan, Iran. I tried googling that source, but I only found this address sold Persian Carpets. But google does not share everything.

Would not a better choice have been 100% pure unrefined, world renowned Australian emu oil? Should it not be the best natural fair choice against pharma? Was this clinical trial a cherry picking* event? Is it misleading? We do not often read about a natural product going up against pharma and winning, do we?

The conclusion in this study

‘Emu oil is a potentially useful agent that significantly improves itching, erythema and scales associated with SD; however, it was less effective than hydrocortisone and clotrimazole which are routinely prescribed to treat SD.’

I was not surprised by the conclusion. At least emu oil did not get tossed. But is it not important to consider what other products these 126 volunteers were using in their skin care regime? The soaps and cleansers? Sun screens, hair gels, sprays? All products being applied to the skin play a role in its health, along with one’s diet, DNA, environment. These issues were not even mentioned and should have been considered at the beginning.  Maybe the cleansing and cosmetics used had been a direct contributor to the Seborrheic dermatitis in the first place.

Did this clinical trial have a ‘cherry picking’ conclusion? We did not win this trial. But then again, we weren’t picking the cherries.

*Cherry picking data is the act of selecting evidence or research that supports a certain position, often a controversial one, while completely ignoring relevant evidence to the contrary. It does not necessarily mean that one side’s information is incorrect, but that a complete picture is not being presented because available evidence to support the other side is not being taken into account.